April 5, 2019 marked 25 years since grunge legend Kurt Cobain killed himself. To commemorate the late musician, a local gathering was held in Seattle earlier this month. At Viretta Park, near the house where he pulled the trigger, Cobain’s fans gathered and brought with them flowers, candles, handwritten notes, and other memorabilia in collective remembrance of the iconic musician who put home grown Seattle grunge on the map.

The notes and flowers had messages like “Find your place,” and “Thank you for your art.” Although the occasion is a sad one, it would seem that the point is not lost on the people that Cobain left behind, with positive messages surrounding the 25th anniversary of his death. Even the now 26-year-old Frances Bean Cobain, his only daughter, took to Instagram Stories to send out some positive vibes. She uploaded a picture of her dad as a child, alongside a succinct and very supportive message. “If you are struggling with your mental health and need someone to talk to please do not be afraid to reach out to your friends, neighbors, parents, counselors, teachers or even strangers on the internet. Needing help is not weakness,” she wrote. “Let’s end the stigma and shame towards the struggle with mental health.” It was then followed by the US National Suicide Prevention Lifeline’s contact details. 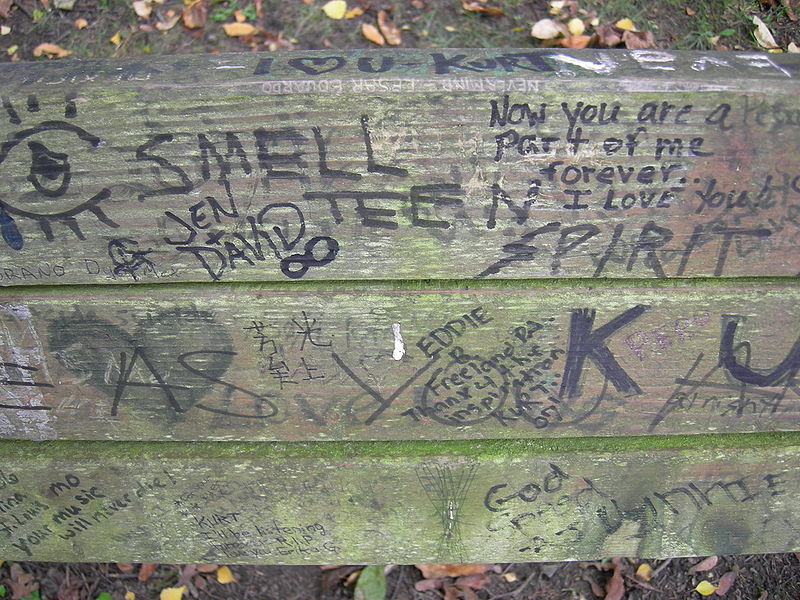 It surprises no one that the memory of Kurt Cobain is still very much alive, 25 years after he died. Quartzy recalls how in November 1994 — just a few months after Cobain’s death — Nirvana Unplugged was released and sold 300,000 copies within its first week. Today, it’s still known as arguably the greatest rock performance in the history of MTV’s Unplugged series.

Although Nirvana had only released three albums before Cobain died, it was more than enough to literally change rock history. What rock fan isn’t familiar with the opening chords to Smells Like Teen Spirit? It’s a grunge classic which Lottoland credits for being pivotal in helping the formerly niche alternative rock genre, enter the mainstream. Fans of Nirvana and ’90s rock in general know that this isn’t just an exaggeration. Since its release, Smells Like Teen Spirit has been covered by the likes of Tori Amos and Imagine Dragons. It’s also been sampled several times by different hip hop artists.

In 2013, rapper Jay-Z actually secured permission from Courtney Love to use the song’s lyrics on his then new album, Magna Carta Holy Grail. Love said that Jay-Z used the lyrics without asking, but later spoke with her to ensure that “the business side has been taken care of.” Much later in 2017, Nirvana’s Nevermind, the album from which Smells Like Teen Spirit originated, sold 2,000 copies in cassette form. That may not sound like much, but it was enough to put Nevermind in the top 10 best-selling cassette albums in the US for 2017, a list which featured mostly modern albums like Kanye’s Yeezus (2,000 sold) and Guardians of the Galaxy, Vol. 2: Awesome Mix Vol. 2 (19,000 sold). This only proves that Cobain’s work still resonates with modern audiences — even in nostalgic formats.

To commemorate the 25th year of Kurt Cobain’s death anniversary, let us remember that he was not just a highly influential musician, but also a positive force in this often harsh world.

News: Rihanna Is the World’s Richest Female Musician With A $600M Net Worth