Gracing the cover of Frances’ first print Barberline magazine will be Aaron Cohen. The cryptic- multifaceted rapper is vastly becoming a force to be heard amongst the creditable names of Hip-Hop. Who would have thought that Action Bronson wouldn’t be the only white rapper rocking a fully caved Red Beard, think again; because the Queens based emcee, Aaron Cohen is clearly making a statement. The Seattle Born lyricist has already stepped foot into the international spectrum of Hip-Hop and is incontestably establishing himself Worldwide.

2015 started off right for Aaron Cohen, by headlining his first French/Euro that started January 28 in Paris with Smoke DZA and ended up Feb 8. Amongst all promo, he was also featured for an interview in Paris #1 FM radio: Gėnėrations 88.2

Aaron is set to drop his new EP (late April/early May), you can catch Aaron with partner in crime ABGOHARD aka the Ugly Boyz, that started making a lot of noise with their second video off their project: “Right Here”. The song “Right Here”captures the grimy yet beautiful side of Queens. Its intent was to be dark, mainly designed to let people know that they, [Ugly Boyz] are right here and not going anywhere!

Aaron’s 2014 highlights: right after the release of the mixtape Potential Fans late 2013, Aaron started 2014 with The Source cypher: Masters Of Ceremony. Soon after, he dropped a banging’ video for “Why You Mad For” premiered by Mass Appeal. Briefly after that, Aaron was on the Team BackPack cypher, then hopped on a plane to SXSW where he performed 6 shows. Aaron also made a noted appearance on Jack Thriller’s first cypher: 16 or Better. Back in Seattle for a few days, Aaron was the special guests of the two main (terrestrial) radios out there: Kexp and Kube93FM. Early May, he headlined SOBS, followed by a performance at Santos, opening for Madchild/Swollen Members and Slaine. The following week, he shared the stage with Two 9 and Worlds Fair at Webster Hall! Late September, Aaron was in France for a couple shows. Full house! Early October, Aaron kicked an amazing freestyle on Sway in the Morning, then went on the road for a few shows on The Smokers Club Tour, opening for Method Man, Redman, B-Real and Berner. In the midst of all this, Aaron released numerous other music videos, did many online interviews, has been featured on print magazines (including in France and Japan!) and did photoshoots with dope photographers such as Jerm Cohen, Scut 36 and Bebe Downtown. Oh! And he also met up with Raekwon, just because! 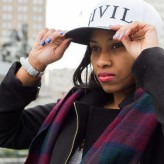